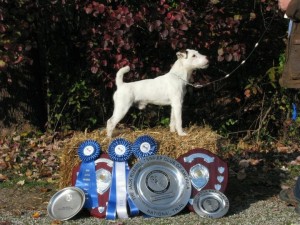 I received Riddock recently and cannot take any credit for his accomplishments – all of that goes to his co-owner, Janon Frei of Dig’em Out Terriers. Riddock is a sweet, beautiful dog that has held his own in the ring for many years. He was the 2010 JRTCA National Best Open Dog and Best Open Terrier. His earthwork is not his strongest asset, although if asked he will do what he needs to do to finish things up. What we discovered after we got Riddock home was his phenomenal tracking ability. From the minute we laid a blood trail for this dog, he was locating downed large animals in the thick woods of our East Texas home. Since that first track, he has never missed. There are not enough wonderful things I can say about this dog, I have loved him since I first saw him, and we are so happy that he is here and thriving with us, and are grateful to Janon to giving us the opportunity to use him as a stud dog and a working dog. 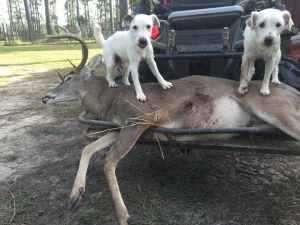 Riddock and Chigger helped recover this buck that was gut shot – the entire recovery was approximately 5 hours through swamps, woods, and across a road. The hunter said there was no way they would’ve been able to recover him without our dogs. 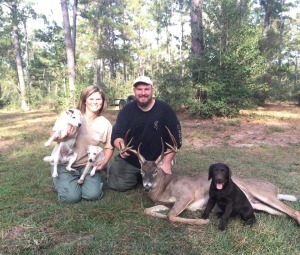 Riddock, Chigger, and Muddy recovered this buck in November 2014

He has turned out to be more than we ever imagined, and is the number one member of our Recovery Team for blood tracking. Several of his puppies are already successfully doing blood tracking at less than a year of age and two of his girls are in our Diabetic Alert Dog program. He has a nose that doesn’t quit and is passing it on to all of his kids! 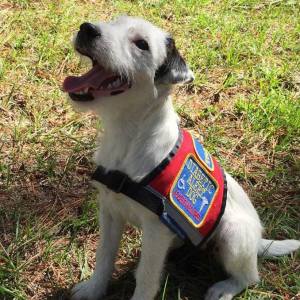 Riddock’s Daughter, Thistle Ridge Hope, is being trained to be a Diabetic Alert Dog 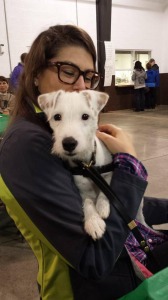 Riddock’s Daughter, Thistle Ridge Rockstar, is being trained to be a Diabetic Alert Dog 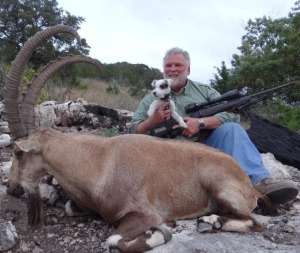 Riddock’s Daughter, Thistle Ridge Bandita, began working at FTW Outfitters this season and as of the first week of November has recovered 8 animals at the ranch. She is only 6.5 months old. 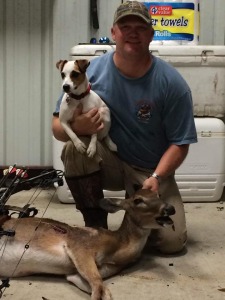 Riddock’s Daughter, Thistle Ridge Roux, made her first recovery at the age of 10.5 months in October 2014. Roux belongs to the Wood Family in Louisiana. 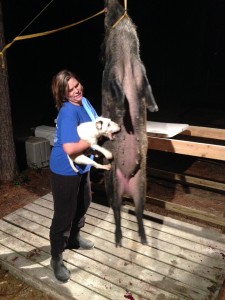 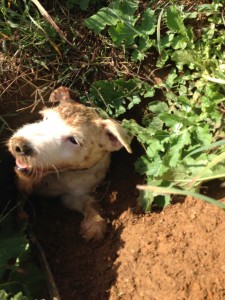